As Shaun Baxter noted in his authoritative column on the subject a few years ago 4ths are a less common interval choice for sequencing and melodic playing in rock, probably because they’re just plain awkward to perform on the guitar. As they’re relatively unfamiliar in the genre they can create a striking and original effect that can help to give you a modern edge.

You really have to listen to modern jazz and fusion players to find any guitarists that frequently phrase with the interval; in particular, Frank Gambale is arguably the God of 4ths on the guitar and his unmistakable playing style is probably quite audible as an influence on certain phrases in this piece.

As I tried to stick to 4th intervals only for the vast majority of the piece I played with the harmony a fair bit to keep it interesting and give it a modern fusion vibe. The chord progression is a series of non-diatonic sus4 chords with quartal comping, and I applied phrasing concepts including chromaticism, motif cycling and modal mixture amongst others.

Regardless it should be noticed that this piece is a limitation exercise, designed to focus on and develop one core concept. If I were writing or playing over this piece for a real recording or live performance I would certainly include other intervals as well as just 4ths! 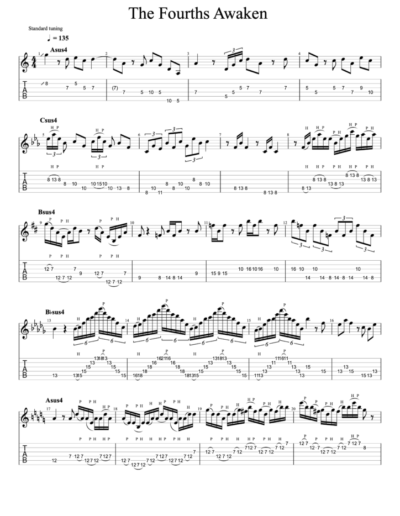 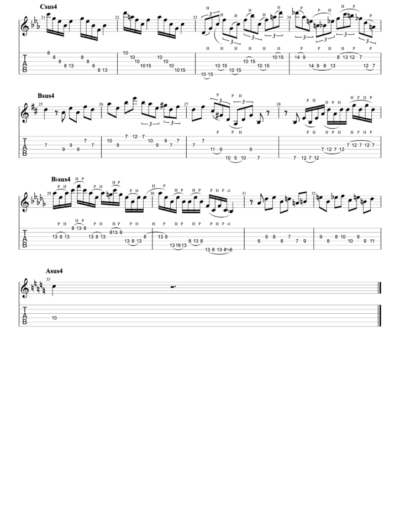 The best way to get the most from this study is to go through it one phrase at a time with an experienced instructor. For information on taking lessons with me in London please visit my Private Lessons page: